Sukju Namul (Korean Bean Sprout Salad). Sookju namul, or Korean mung bean sprout salad, is one of the most popular side dishes you're likely to find in Korea. It's fresh, delicious, healthy, and it's easy to make. It is also versatile, complementing almost any Korean meal. 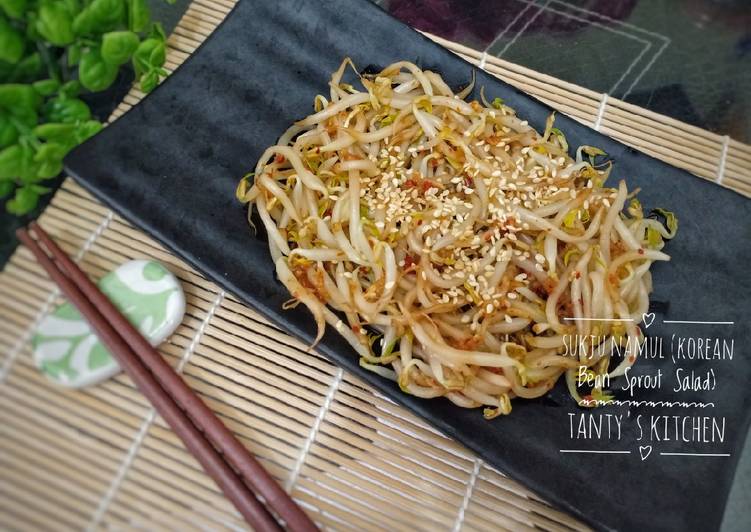 BTW, just to clarify, the bean sprouts in this Korean Bean Sprouts recipe are Mung Bean Sprouts and NOT Soy Bean Sprouts which is called Kongnamul (콩나물). Today's recipe is another simple side dish (banchan) called Sukju Namul Muchim (숙주나물 무침, Korean style seasoned mung bean sprouts salad). It's made in almost the same way with almost identical ingredients (except for the quantity) to the spinach side dish I posted recently. (This is how typical Korean sautéed side dishes are made!) Sookjuk namul (숙주나물 무침), or Korean bean sprouts salad, is one of those essential Korean side dishes, also known as banchan, served in every Korean household, restaurant, and supermarket. You can have Sukju Namul (Korean Bean Sprout Salad) using 7 ingredients and 3 steps. Here is how you cook that.

It's kimchi's little cousin at Korean barbecues and the quintessential topping for bibimbap. It's a very simple dish made of beans sprouts, garlic, scallions, toasted sesame oil, sesame seeds. This is a nice simple dish made with lightly boiled bean spouts that makes for a nice mild salad against a backdrop of spicy Korean food. The bean sprouts are crunchy with a great garlicky sesame flavor and go really well with a bowl of rice.

Sukju Namul (Korean Bean Sprout Salad) Bring the water and salt to a boil in a saucepan over medium-high flame. Drain the sprouts, rinse them with cold water and squeeze out any extra water with your hands. Rinse the sprouts in running water until cooled. Squeeze excess liquids from cooked sprouts. In a bowl, add cooked sprouts and the rest of the ingredients.